Why You Are Probably Out Of Tune 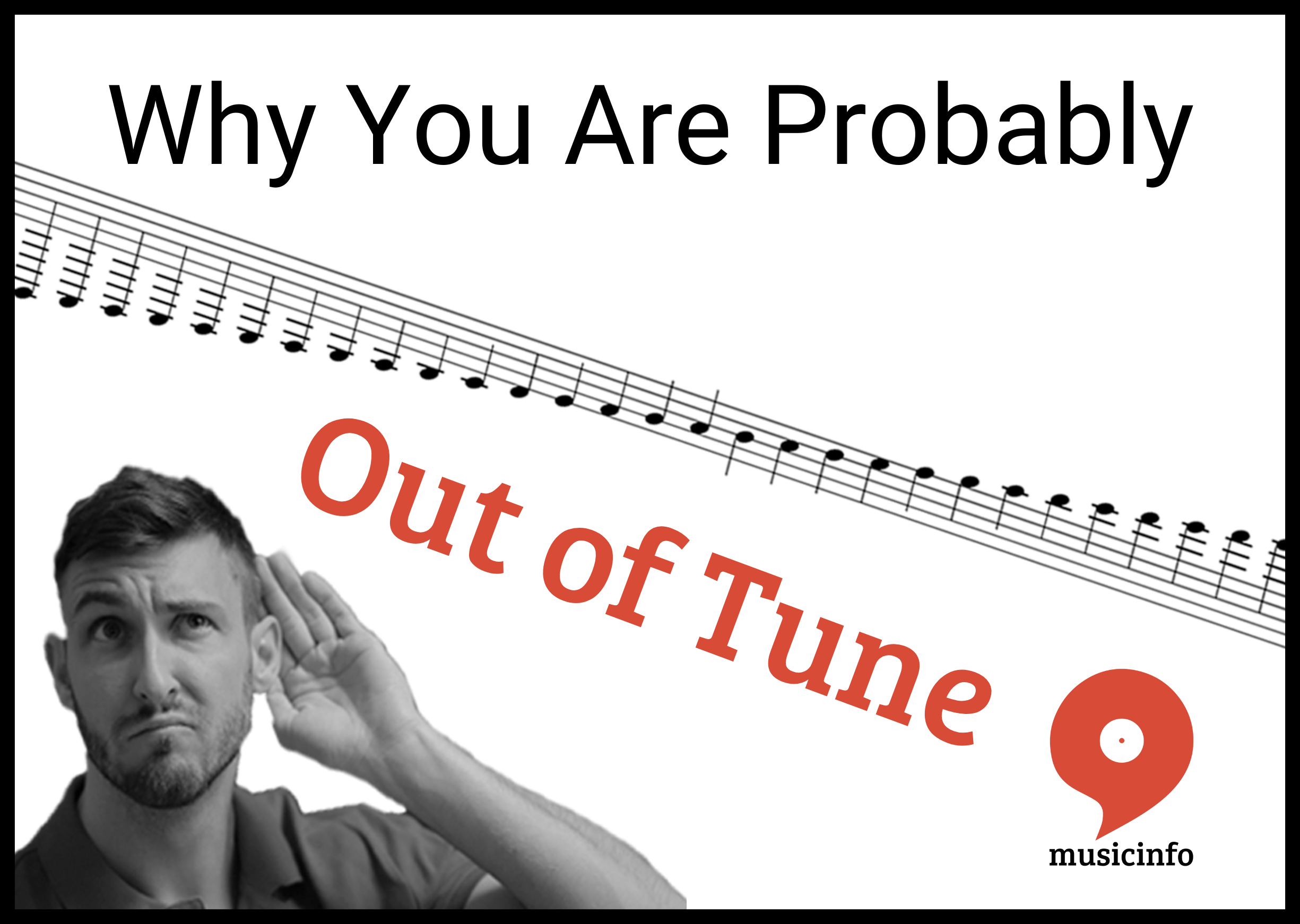 First of all sorry for the title. If you are a musician who sings or plays an instrument hitting the 12 familiar notes you’ll find on the keyboard, I’m sure you’ll sound good. I bet you are talented and are in tune in relation to your bandmates. Also  when people listen to your music and hear your pitch is perfect, they can’t be wrong, they wouldn’t listen to something that is out of tune. Right?

So why am I saying you are probably out of tune? I am referring to the characteristics of our tuning system. The tuning system we use in basically all of the western music we hear around us is designed to be flexible so you can sing or play a melody in any key and it would sound more or less, in tune. But, it is not perfect. So I don’t mean it as a negative thing that you’re probably out of tune. The dominant system used in the West is called the 12-tone equal temperament (from now on I’ll refer to it as 12 TET). There are other systems which use the same 12 familiar notes, such as Pythagorean tuning, Meantone temperament, Well temperament and many more, but I’ll focus on our common 12 TET in this text.

In the 12 TET the octave is divided to 12 steps, which are equally far apart (on a logarithmic scale) from their adjacent steps; 100 cents. A cent is a unit of measurement used when talking about tunings and small changes in musical pitch. To give a sense of the size of the units: The smallest difference we can perceive in pitch is around 5-10 cents, which of course varies for example due to training.

Example 0. Can you hear which one of these notes is higher? There is a 10 cent difference between them.

The equal separation between the notes in the 12 TET makes changing the key of the song easy; everything sounds “similar” and recognizable no matter what key the song is played in. This is very handy, because singers and instrument players can adjust the key of the song to suit their preferences. We are all familiar with key changes in music from all the forced and cheesy ascending modulations from many song's final choruses. If you’ve watched the Eurovision contests, you might know what I’m talking about.

Example 1.  Here is the same 4 chord chord progression (i, ♭III, ♭VII, IV) played once in Db minor, Eb minor and B minor.

The downside of this tuning is that almost all the notes in this temperament are a bit out of tune as I implied earlier. So what do I mean by that?

So when I say something is “in tune”, I refer to pure intervals. By musical interval I mean the relationship between any two notes. Pure intervals can be expressed with a simple ratio. I’ll try to keep this text simple and not use too much numbers and math, but I’ll give a couple of numerical examples on what I mean by simple ratio. For example the relation between a “c” and a “c” one octave higher is 2:1. So if you have a string vibrating in “c” and you divide it in half and play it, the resulting note is “c”, but exactly twice as high in pitch (octave). The relationship between “c” and a “g” note above “c” is 3:2 (perfect fifth) , which means that the “g” is 1.5 times higher than “c”. The relationship between “c” and “f” is 4:3 (perfect fourth), so the “f” is 1 ⅓ higher than “c” and so on. Most of us humans find the sound of these pure intervals harmonious. They seem to please our ears. At least I like them! The tuning, where all intervals are “pure”, is called Just Intonation.

Octaves are exactly 2:1 in both Just Intonation and the 12 TET and the perfect fifths and fourths are slightly out of tune (1.96 cents), but inaudibly close to the pure ones. Below you can see a chart, which shows the 12 pure intervals and their ratios and compares the differences of the intervals between just intonation and our 12 TET in cents.

Example 2. Major Third first in 12 TET and then in just intonation

Example 3. Major sixth first in 12 TET and then in just intonation

Example 4. Minor sixth first in 12 TET and then in just intonation

Overtones and the harmonic series

If you play for example a string of your instrument, the string doesn’t just vibrate with its full length; each half of the string also vibrates as does the thirds, fourths and so on as a set of “smaller strings” within the full string. So one string actually produces “many notes” at the same time - not just one. Crazy! These harmonic frequencies above the fundamental frequency are called overtones. These overtones are much quieter than the main frequency, but you can hear some of them if you have a fresh string on your instrument. So all the notes in the just intonation mentioned earlier are basically these overtones from the harmonic series.

Picture 1. An illustration in musical notation of the harmonic series (on C) up to the 16th harmonic (tune difference to 12 TET not marked)

As a side note it is worth mentioning that in addition to the way an instrument is played (picking/blowing/striking) the unique timbres of different instruments are largely defined by the strength of the different overtones it produces! That is why a “c” note played on a piano sounds different from the same “c” note played on a saxophone or an acoustic guitar. They each have a different character in the overtones they produce aka timbre

The problem with Just Intonation

So why don't we just tune our instruments to Just Intonation and enjoy harmonious music all day everyday? Good question. You can for example get your piano tuned to Just Intonation to only one key - let’s say C. Then all the 12 notes are derived from the series of overtones based on C and all the notes you play in that key sound great together (a matter of taste of course!). Issues come if you want to play in another key. For example the chords C# or E will be horribly out of tune, because the “pure notes” for those should be derived from their overtones, not from the overtones of C. So basically the spaces between the 12 notes are not equal in Just Intonation. That makes key changes sound really awkward. But if you are ok with playing music in just one key, then just intonation is the way to go. Below you can listen and compare the differences in the sound of chords in 12 TET and Just Intonation and hear what happens if you try to play chords in Just Intonation outside the key they were tuned to.

And of course, if you sing, play violin, trombone or other instrument, which doesn’t have a “predefined” tuning system in them, you can play almost everything using Just Intonation. You just have to use your ears to find the pure notes. But, if you play with pianists or guitarists, you need to play by their predefined notes. Pianos have keys and guitars have frets which dictate the name of the game, how each note is produced on the instrument, which is usually 12 TET.

It is interesting to notice when a choir sings without an accompaniment, a song which starts and ends with the same chord, the last chord can be noticeably different in pitch. This is not because the choir is unprofessional and out of tune, but the exact opposite! If a choir sings perfectly in tune and makes every chord resonate harmoniously with the pure intervals, the continuous movement through the different chords will most likely affect the root notes at some point. For example (music theory warning!) if the choir sings an F-major chord with the pure major third (a) as the highest note and goes to A minor while continuing the same high note without changing it, the A minor will be lower in pitch than it would be with accompaniment. From the chart you can see that the pure major third is much lower than the 12 TET major third. Once these kinds of chord changes happen during the song, they will eventually alter the pitch of the previously sung chords when they reoccur in the same song. So in music we need to choose between pure perfect tune or a constant center tune. We can’t have it both ways!

Some of you might now wonder that if perfect harmony is so hard to accomplish, why don’t we divide the octave differently? With more steps we could get closer to  pure intervals, maintain the possibility of in-tune modulation and at the same time get a bunch of new interesting notes to use. Sounds like a bargain!

Actually there are a lot of ways to divide the octave , for example dividing to 15, 19, 35 or 6 million(!) equal steps. Many people are composing and playing music using tunings which have more than 12 steps in octave. This kind of “microtonal” music opens up new soundscapes and ways of expression for sure. Check out Brendan Byrnes or Sevish to hear these non-ordinary tunings in pop/electronic styles or if you prefer piano music, Taylor Brook or Michael Harrison might be good options to start.

So why is 12 steps the established number of steps per octave? Well first of all it sounds “good enough”. With 12 TET we can get really close to the harmonious intervals I addressed earlier, especially the dominant perfect fifth and its mirrored sibling the perfect fourth. Indeed all intervals are not equal in importance for us; the octave, the perfect fifth and the perfect fourth are the most consonant ones and are present in almost all music cultures. It makes sense to have such a tuning system, that at least these three intervals would be as in tune as possible. So, if we would divide the octave to more steps it is true that we would get closer to the pure intervals. For example using a 19 TET many other important intervals are really close to the ideal pure ones, but then the perfect fifth and fourth are further away from their pure intervals and audibly out of tune.

Another obvious reason for 12 steps is practicality. If we add more and more steps to get closer to pure harmony, the instruments will become more and more impractical to play. We clumsy humans have physical and mental limitations and 12 steps seems to be a manageable number to operate with. Also the harmonic complexity 12 notes enables is immense. Just imagine learning to play the piano with 31 keys in an octave! My head and fingers hurt just from thinking about that.

Tunings and being in tune are relative concepts and they are also a matter of taste and feeling. Music is just soundwaves which express feelings and there is no right or wrong system to create your masterpiece. Go out there and explore different tuning systems! Give it a chance and don’t be frightened at first. Maybe you’ll find some inspiration, get crazy new ideas and learn to like these otherworldly and intriguing soundscapes. If you just can’t get into these new systems, at least you will get some ventilation for your 12 tone tuned ears and see (or hear) that there is a whole new world of unexplored sounds out there.